Scheherazade made meatloaf. You DO remember her right? The chick that told 1000 tales to the King of Persia? You know, Tales from the Arabian Nights? YEAH! THAT chick. That’s her!

Well, she made meatloaf. I mean it’s not actually documented anywhere, but surely she did.  Telling tales for 1000 nights would work up quite an appetite and what other recipe is so versatile as to keep one from getting bored with your meals for that many nights? Oh, I’m sure she threw in some yogurt and bread and such, but I think meatloaf was a staple.

Did you know tablets from the time of ancient Persian people indicate that the inhabitants of Mesopotamia were using basil, cilantro, cumin and caraway in their food in 4,000 BC. Apricots, artichokes, eggplants, lemons, lime, oranges, pistachios, spinach, saffron or tarragon all came to Europe through Persia. I didn’t know that, but Wiki did. See, I research this stuff for you. We should know this.

Back to Sher’s meatloaf. So yeah. I believe she made meatloaf for many of those 1000 nights. It must have pretty darn good because the King spared her life and married her. I guess that would make her Queen of the Meatloaf.

Make sauce by whisking all ingredients together.

Saute all veggies, except spinach, in a pan with oil until tender. Place ground beef in a large mixing bowl. Add cooked veggies, bread, soup mix, ketchup, Worcestershire sauce and eggs. Mix with your hand until ingredients are incorporated but careful not to over mix. Divide meat into halves. Place one half in a greased 13×9 pan. Add a thin layer of sauce. Spread cheese and baby spinach over the meat & sauce layer. Top with the remaining meat, then with the remaining sauce. Bake at 325 for about an hour or until meat is cooked all the way through.

If you want to add some fun to your meatloaf you can serve it as cupcakes with mashed potato frosting, or even as a meatloaf and mashed potato parfait! The kids will gain a new appreciation for meatloaf.

For a great side, check out these Confetti Mashed Potatoes! 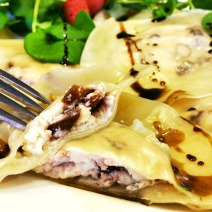