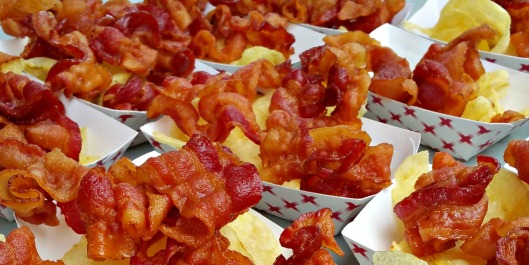 Atlanta’s outrageously savory and oft-salacious annual event, BaconFest, returned on Saturday March 26, 2016, to a brand new location – the 20-year-old theatre company’s new home at 569 Ezzard Street, just off of Edgewood Avenue in the Old Fourth Ward. Despite Saturday’s weather, there were over 2,000 Atlantans in the new home indulging in bacon, beer, getting their faces painted and more on Saturday afternoon.  Additionally, this year’s BaconFest was treated with a couple getting (re)married on the main stage during the event and to accompany the wedding, Celest Handlee, the host of the Georgia Public Broadcasting program “On Second Thought,” sang during the wedding. She later also performed again on main stage during the Honky Tonk Karaoke. Additionally, Candice King, playing Caroline Forbes in The Vampire Diaries, was also in attendance at this year’s BaconFest.

Founded in 1992, the kitschy festival has become a fixture in the Atlanta community by combining troughs upon troughs of cold beer and sizzlin’ bacon with hilarious carnival games manned by the best improvisers in the city and unforgettable entertainment like a hobo wine tasting, naughty face painting, Human Foosball, a Flip Cup Tournament and more.  A wild success every year, all proceeds benefitted Dad’s Garage Theatre Company, a nonprofit theatre group that engages, cultivates and inspires artists and audiences alike by producing innovative, scripted and improvised works that are recognized locally, nationally and internationally for being undeniably awesome. Stay connected on Twitter at @baconfestatl and on Facebook at www.facebook.com/BaconfestATL. 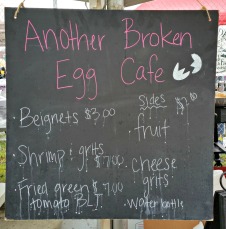 ABOUT DAD’S GARAGE THEATRE COMPANY:  Founded in 1995, Dad’s Garage Theatre Company has grown from a small volunteer led organization to a thriving mid-size theatre led by professional artistic and administrative staff that includes over 300 volunteers and performers. In 2013, Dad’s Garage which had entertained more than 30,000 people annually at their two-theatre facility in Inman Park, was forced to look for a new home as a result of development in the area. Temporarily staying at neighboring 7 Stages Theatre in Little Five Points, the Theatre continued to produce its own productions in addition to public events across Atlanta and the state, and at improv festivals across the continent.  Dad’s Garage Theatre officially celebrated the opening of its new location the Old Fourth Ward on New Year’s Eve, December 31, 2015. For more information, visit Dad’s Garage Theatre Company online at dadsgarage.com.  Stay connected on Twitter at @dads_garage, on Instagram at @dadsgarageatl and on Facebook at www.facebook.com/dadsgaragetheatre.

For more information on BaconFest and Dad’s Garage Theatre Company